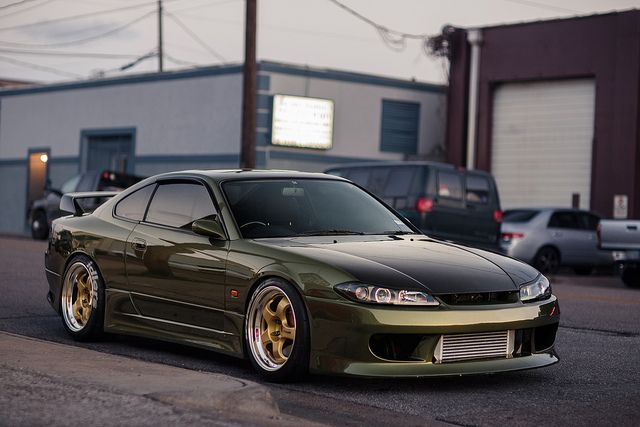 If you are into drifting, you probably heard of the name Nissan Silvia – one of the best drift cars with 2 most popular variants: S14 and S15. So what are the differences between the two models and what is the best Nissan Silvia for you? Let’s find out!

Nissan Silvia: What Is It?

Before starting to find out details about the two models, we will go over some basic knowledge about Nissan Silvia. What is a Nissan Silvia? Nissan Silvia – one of the extremely iconic sports cars of the Japanese brand in the past (also known as 200SX or Gazelle).

Silvia was used by the firm to denote the evolution of their tiny rear-wheel drive automobile line. The numbers indicate the generation it belonged to. Although the last Nissan Silvia generations were discontinued, they still exist and are popular with drift fans.

Nissan had a sort of little sports car called the Z but it was getting more expensive yearly. As a result, S models were produced, starting with the S10 model in 1964. Followed by models: S12, S13, S14, and S15-the last generation of Nissan Silvia.

All these models also have the highlight features like being designed to be the lighter and less expensive automobiles that Nissan desired and the rest of the world needed. However, in this topic, we will discuss the latest models of Salvia S14 and S15, and we are sure you have seen the silhouettes of these 2 models in the legendary movie called Fast and Furious.

Nissan Silvia S14: Everything You Need To Know

Silvia S14 would debut in Japan in late 1993 and the rest of the world would get it in 1994. Drifting became more simple as this car grew broader, lower, and had a long wheelbase.

There are two different non-pop-up headlight periods and styling. S14 is rated as its own unique taste by many racers. The Silvia S14’s original intent to be an affordable and lightweight sports car is no longer what defines it, instead being changed by the platform’s tendency to easily drift for racers.

What made S14 different compared to old models?

Nissan Silvia S14 was made from 1993 to 1998 and it brought a lot of modern improvements to the S chassis platform. The interior is one of the big upgrades with the dash and much modern equipment, and it feels like this car comes from the early 2000s versus the mid-90s as its history. S14 did a facelift so it makes the car a little bit more aggressive.

In the used car market you can find cars that are tuned and ready to race or drift. To have a better overview of the price of this car, we categorize used cars and new or modified cars. For used S14 models, prices can vary from $4500 to $10000 (mint cars). Modified models such as changes in engines and suspension systems, make Silvia S14 a cheaper performance machine. The costs to buy this model will range from $2000 to $8000.

The Truths About Nissan Silvia S15

Silvia S15 – The last S-chassis of the Nissan, and was the most modern version of any chassis. Launched in the early 2000s and also the last generation of Nissan Silvia, the S15 is one of the more popular choices among drift enthusiasts. Sleek style and effective engine make Silvia become a favorite car for any racers. Let’s go into the details of this model to see what outstanding features it has compared to the S14.

Some highlights of the Silvia S15

How much does a Nissan Silvia S15 cost?

Price is one of the topics that many people are interested in when deciding to buy the Silvia S15. Of course, the cost varies depending on the year of manufacture and other factors. However, in general, the price will range from $4500 to $14000.

Based on the above analysis, we can see that it is very difficult to make the perfect choice between the two models. However, in terms of exterior, when compared to the S14. It is safe to say that the S15 is a car with the best visuals and its looks are sure to stand the test of time.

However, if you have some limits on your budget. The S15 is not a good option for you when considering the price compared to Silvia S14. The price of this model is starting to absolutely skyrocket right now. Because they are getting closer to coming over to the United States with a 25-year import rule. You can bring or import an S14 or S13 to the US right now. But if you want to have the Silvia S15, at least you have to wait until 2024 to own this stunning model.